A 3 level puzzlescript game about duplicating blocks to destroy walls

Ok. Here is the link to the extended version.

Consider trying to fix the problems I encoutered for some of the levels.

I played through the whole game I like the shapes of the levels and the story but I am a bit critical about the gameplay. Most of the puzzles are not too 'thinky' and feel more about just placing blocks in position.  its not really my thing.

And the new ideas that were explored were placed in levels like 14, 15, 18, 33 which are too easy. and I get that they are easy to show the new mechanic but you can show the new mechanic with the level also having a puzzle as well. You have a great example already level 16 could introduce the concept of green cloners and not level 14.

There were levels where I felt placing the blocks into position felt too much like 13, 18 and 34 (18 could of been halved down the diagonal to get the same feeling for the puzzle)  and I bounced off completely from 39 and 40 because the block moving/positioning was too much.

You should probably post the puzzlescript play link in the #playtesting section in discord and ask for advice on the levels and their design, I'm not that great with that stuff  :/

I am SO sorry about the game. It's just your mechanic. It's too hard to think of levels without too much block moving/positioning..

maybe a different direction might have been, to choose a new different type of mechanic to work with like ice sliding, block swapping or a block trail. If you find the mechanics hard to work with finding new ones to work with might help. The new mechanics you decided to implement were quite similar to the old ones so they would probably have their same problems too. If you find mechanics in the future difficult to work with this might help you a bit.

Personally I think I would look into a different type of layout design for these mechanics maybe cramped spaces and cloners just make the space more cramped when you use them or the player is not just moving a block into position has to move themselves to end point to push a block as well. The majority of layouts at the moment is getting the amount of blocks you need and placing them in a section and that can easily end badly if your not careful because of the amount you have to move.

You know what ? Maybe you are right. I think I should start editing some of the levels and add some stuff.

I still think there are some levels that can work with the mechanics you currently have. like this one 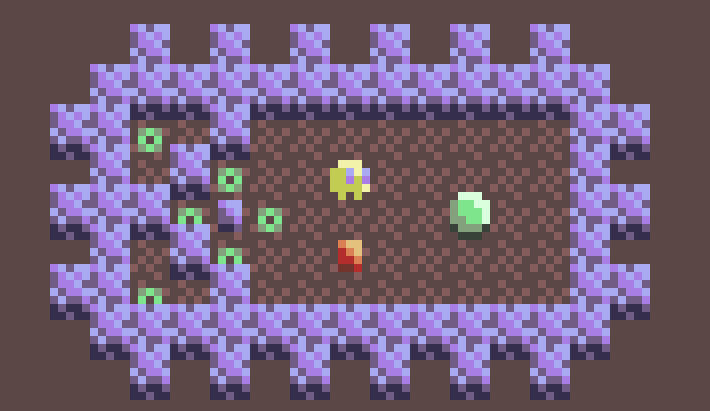 Hi it's me again. I'm just here to say that I'm almost done with the extanded version and I have to make around 8 more levels. I'll send a link to a hack where you can "animate" the ending.

There you go, the game is all done. But I'm not sure about the last levels. Are they okay to you ?

Also can you do the same thing you did with the extanded version of Path Lines ? (The animation)

Spoliers of my extended version of this game :

be careful big is not always better. I personally use smaller levels to force myself to find interesting ideas for puzzles. If its done wrong it can lead to levels that you understand what to do but require a lot of tedious steps to complete it.

path lines is a different beast than the copying, path lines had an interesting premise to wrap your head around whereas the copying is a lot of the time just about pushing blocks which if done wrong can lead to tedium fast.

if you are making bigger levels make them all feel interesting and have unique experiences.

As much as this iritates you, I had to make lots of big levels. Mainly because I lack of inspiration for small levels using your mechanic. Expecially the first ones.

Hi ! Since I added the Ultra cloner, there will be more small and challenging puzzles. Hope this will make you happier !